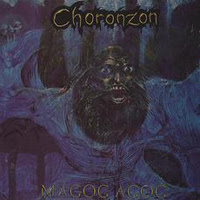 We obtained the remaining copies of this CD straight from the Nocturnal Art Productions warehouse. Mint condition shrinkwrapped, and once this CD sell out, that's it.

Review in Pit Magazine Issue # 28
Choronzon-Magog Agog-Nocturnal Art Productions
Releases like Magog Agog are far and few between here at Pit. Predictability is fairly common on most metal albums. Te strange, psychotic flair of this one definitely doesn't fit that bill. The first half sounds similar to mechanized aggro-metal, but heavy electronics eliminate a substantial link. The opening track utilizes layering or multi-track technique of instruments and sounds producing a disorienting effect. It almost sounds like a chaotic "test" track,to immediately weed out the nimble minded "brutal" listeners from the adventurous ones. Perdurabo(MagogAgog) follows with aggressive metal tendencies, but warps, explodes and reconstitutes itself from the meshing disarray of sound and structure. Eventually, the material calms down to reveal a black metal musician basking in the electronic light. Be warned! this record is an acquired taste! For the dark eccentric weirdo in the metal crowd only.
-Kurt Hubert
at 1:31 PM

Email ThisBlogThis!Share to TwitterShare to FacebookShare to Pinterest
Labels: black metal, cd's, choronzon, out of print