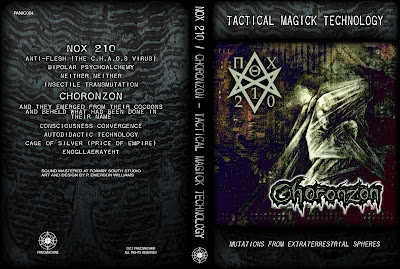 Coming soon to PANICMACHINE in digital and CD on DVD case limited to 333 copies. This release unites the magickal currents of NOX 210 and CHORONZON into a single theme and focus. The sum total of the experience flows in its own harrowing way, implanting its alien intelligence deep within your psyche.


Tactical Magick Technology inhabits the intersection of mind control, occult traditions, dimensional travel and modern myths like aliens, conspiracy, psychic warfare. Through magick and memetics one embed one's consciousness within egregores to be the proverbial butterfly causing hurricanes while directing ones personal narrative. Events occur and all possibilities play out in new universes birthed at these crossroads.

Tactical Magick Technology breaks down language and the defences of the psyche. Breaking down the psyche as developed through socialization removes the limits of mind and between minds.

Cage of Silver (Price of Empire)

NOX 210 is the Night of pan, transubstantiation of ecstasy, madness, obsession, aberrations and self transformative process into the nothingness... A meta-program living sigil incarnated though such psychotic states where nothing exists, just manifested in a sensorial space where the NOX 210 aspect grows and mutates into such complex and obsessive fragments gathered under the influx of paradigmatical essences!! welcome to hidden transmissions where NOX 210 is the center of vortex, the Zero point intersection of neither-neither world!!! This project was created as NULL, but due the great Japanese act with the same name, we changed the name to NOX 210!!!!

CHORONZON was originally an Occult ritual persona Used by P. Emerson Williams (Veil of Thorns, kkoagulaa) to explore the 333 current. Performances in the late -80's and throughout the -90's were by invite only and for initiates only. CHORONZON released of a series of self produced cassettes, ranging from recorded rituals to black-thrash assaults to industrial soundscapes. CHORONZON signed to the record label Nocturnal Art Productions in 1998, and released the album Magog Agog. Since that time, CHORONZON has remained in front of the collective consciousness, exploring space between space in ever stranger realms on each release. The totality of CHORONZON's oeuvre encompasses a single hypersigil.
at 1:47 PM