This piece is a sketch for the cover illustration of the book Pacts With The Devil A Chronicle of Sex, Blasphemy & Liberation  written by S. Jason Black and Christopher S. Hyatt, Ph.D. published by Original Falcon. This was an opportunity to meditate on the power and history of one of the defining archetypes of the Western world.

The choice to present the diabolical faces superimposed on the facade of an office building makes the point that we have to make deal with the Devil every day with our purchases, career choices and how we have to pay the Beast (The Machine) just to be allowed to not be cast out into the elements and we have to pay with money and most of our lifetime for the privilege of not being imprisoned and killed. 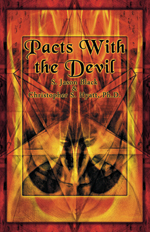 For the first time, a genuine manual of the dreaded "left-hand path." Braving the new Witchcraft Panic that has swept the world, S. Jason Black and Christopher S. Hyatt have written a book that places the Western magical tradition --- and the Western psyche --- in perspective.

Sweeping aside both the historical fabrications of "neo-paganism" and the rampant mental illness of the religious right, Black and Hyatt explore history, psychology and anthropology to reveal the true "secret doctrine" of Western culture. This work confronts the reader with his own fears and inhibitions --- and carries him beyond.