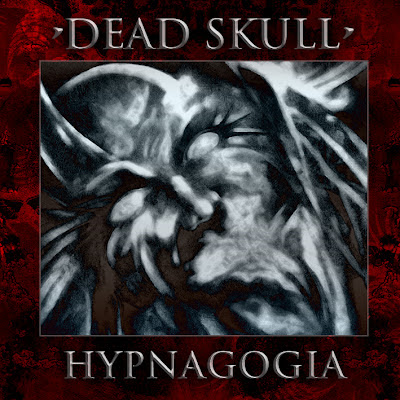 We are immensely  proud to announce the release of HYPNAGOGIA by the great Industrial - Noise - Experimental powerhouse DEAD SKULL!!! For such an assemblage of unique visionaries, our totality of offerings at this early stage is turning out to be as varied as it is cohesive. You can listen through recent original releases and we guarantee it will be a harrowing experience.

DEAD SKULL releases are always deep in conception and masterful in execution. Everything Ferenc Teglas touches is above and beyond the norm. Those of you who have the CHORONZON - Ziggurat of Dead Shibboleths DVD know very well his incredible abilities as a video artist, and he brings the same level of excellence to his musical endeavours.

THE NEUROLOGICAL RELATIONSHIP TO HYPNAGOGIC IMAGERY HAS BEEN PONDERED OVER FOR DECADES.

ONE OF FREUD'S CONTEMPORARIES, HENRY SILBERER, A BRILLIANT DREAM RESEARCHER IN HIS OWN RIGHT, THOUGHT THAT HYPNAGOGIC IMAGERY IS THE CLEAREST EXAMPLE OF AUTOSYMBOLISM, IN WHICH WHATEVER WE'RE THINKING RIGHT NOW IS CONVERTED INTO A VISUAL METAPHOR.

PSYCHOLOGIST HARRY HUNT NOTED THAT THE IMAGERY IS LESS LIKE REM DREAMING IMAGERY AND MORE CLOSELY RESEMBLING THE STUFF SEEN DURING MEDITATION, SENSORY DEPRIVATION (THE GANZFIELD EFFECT) AND ESPECIALLY THE PSYCHEDELIC ECSTACY FROM LSD OR PSILOCYBE.
MEDICAL RESEARCHER RICK STRAUSSMAN SUGGESTED IN DMT: THE SPIRIT MOLECULE, THAT THE PINEAL GLAND GIVES UP A HYPNAGOGIC TRANCE THAT IS CHARACTERIZED BY PREDOMINANT THETA BRAINWAVES.


Dead Skull is Ferenc Teglas' solo work with occasional input from Robert and Gaspar. Since Ferenc stopped with Skattor Minox after 13 years of activity, Dead Skull became his main musical endeavour. The sound of DS could be best described as spiced-up and spaced-out electronics, sometimes overlapping into power electronics genre. Vocals could be heard from time to time, but well assimilated into the overall sound spectrum. Ferenc had two unforgettable gigs with Dead Skull, both times sharing it with completely different sounding bands, which was a great experience.